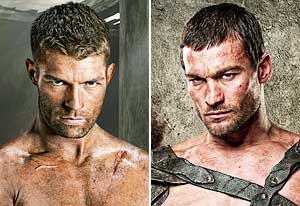 Tonight is the series finale of the Starz’s Spartacus, and as Batiatus (John Hannah) once said, “The Gods have seen fit to spread cheeks and ram cock in ass.”

In the wake of Sparatucs’ impending conclusion here’s a list of my favorite moments and characters:

No two men were as integral to the success of the series as Spartacus himself (Andy Whitfield’s version) and Crixus (Manu Bennett).  The two gladiators fluctuated between being at odds and being brothers – but this, the moment when Spartacus makes an example out of Crixus, is easily one of my favorite encounters of theirs, and of the series.

Lucretia and Ilithyia were sexy and devious.  Both women were smart, and fortunately, both were intertwined throughout their runs on the series.  I loved the different dynamics created by Steven DeKnight (creator and executive producer).  At any given moment during Blood and Sand or Vengeance, Lucretia and Ilithyia were indebted to one another and scheming against each other – veiling their intentions as friendship.  So it made perfect sense that both women would meet their ends together.  What remains are two of television’s sexiest and most powerful female characters – and I for one was surprised that Lucy Lawless was able to find a role that eclipsed her most famous part, Xena. Gratitude.

Spartacus and Ilithyia were tricked into this ultra-sensual sex scene.  The mystery, eroticism, and escapism created by this moment of the series epitomized the sexiest side of this show.  I loved the gold paint, the masks, the aura and overall allure – this scene had scorcher written all over it from the moment it was orchestrated by Lucretia.  The result – one of television’s most daring and beautiful sex scenes ever recorded (because it is a sex-scene, age verification is required for viewing).

Claudius Glaber (Craig Parker), Ilithyia’s husband,  is introduced in Blood and Sand and assumes the role of series villain in Vengeance.  Glaber becomes a feared name and tough adversary of Spartacus, but ultimately falls to the legend of Capua.  There is a softer side to Glaber that vanishes as his character arcs throughout season two – and this is what sets him apart from War of the Damned‘s Marcus Crassus (Simon Merrells).  Crassus has been an excellent villain and finishes just behind Glaber – hell, even his son, Tiberius (Christian Antidormi) is a diverse, multi-layered villain that made a bid for the top spot – but it helps Glaber’s cause that he was paired with Ilithyia and Lucretia – if only Tiberius or Crassus had such enchanting women to boost or betray them on the same scale.

It’s a brief list, I know – but I don’t think any list could ever do it justice.  These are just some of my favorite characters or moments created in the last four years, from one of my favorite television shows.  Spartacus was full of action, betrayal, sex, love, and blood.  There were strong, memorable characters, male and female, and the storylines and arcs were seamless.  It’s been a journey, from the House of Batiauts to the battlefield just outside Rome, but as sad as I’m going to be to see it end, I’m just thankful the show is able to end on its own terms, in its own time.

Thank you Steven DeKnight and crew for creating such a monumental show, and thank you to the cast, including Lucy Lawless, Viva Bianca, and the late, great Andy Whitfield for drawing me in and anchoring me to Spartacus.  I’d also like to say thank you to Liam McIntyre – it couldn’t have been easy coming into the series how you did, but I appreciate the work you’ve done to make it your own.  As a fan, I respect that.  Gratitude to you all.  I’ll be watching.