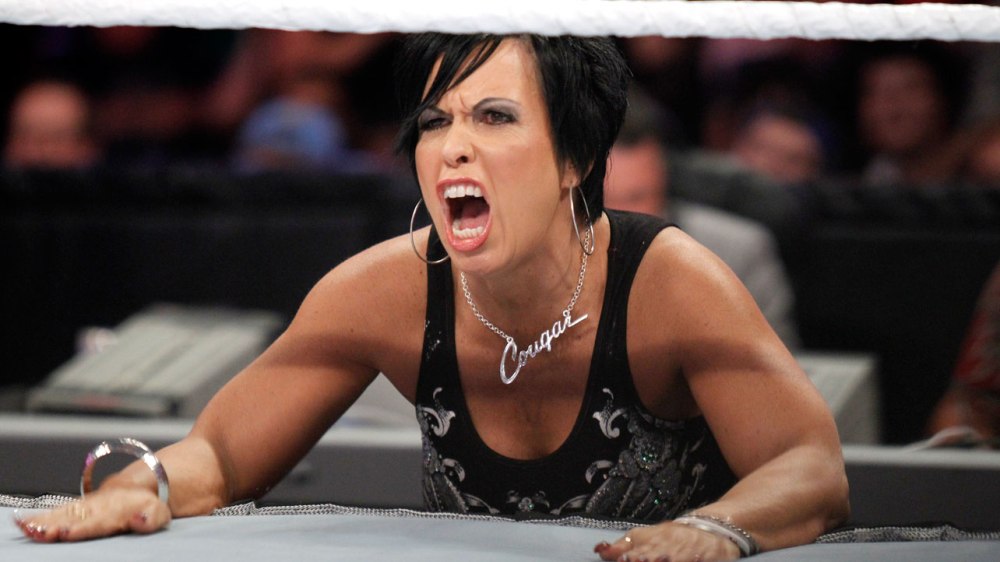 The ‘wrasslin’ rumor ’round town is that WWE’s Slammy Award-winning “Cougar in charge,” Vickie Guerrero will be leaving the company shortly after WrestleMania 30.  The story appears on Diva-Dirt (Report: Vickie Guerrero Leaving WWE) and various other wrestling sites.  If Guerrero is leaving, the day she does will be bittersweet.  She’s the woman the WWE Universe has loved to hate for the better part of a decade.

Guerrero, who debuted in 2005, has been one of the most clearly defined and polarizing characters in WWE, as well as one of the most prominently featured.  Famous for her dirty tactics (much like her husband, the late Eddie Guerrero), her “Cougar” persona, and her catchphrase “Excuse Me!”, Guerrero can ignite a WWE crowd in ways few performers can.

Over the course of her run, she’s been involved with top talent and has several accomplishments to her credit.  She’s one of a select group of women to hold a victory at WrestleMania [26], she’s been the General Manager of both RAW and Smackdown, and she’s worked high-profile programs with Eddie Guerrero, Rey Mysterio, Edge, Dolph Ziggler, Jack Swagger, LayCool (Michelle McCool and Layla), AJ Lee, Brad Maddox, and the McMahon family.

In competition she defeated “Santina Marella” to become “Miss WrestleMania,” she’s won a 10-Divas tag team match (WrestleMania 26), and she’s notably pinned Hall of Famer Trish Stratus and WWE’s current it girl and Diva’s Champion, AJ Lee in their respective programs.  The only thing she hasn’t done is become Diva’s Champion herself, which is a surprise given the state of the Diva’s division ca. 2010-2011 and her constant power plays.

Then again, she still could find a way to take the title from AJ Lee and retire as Diva’s Champion (a la Trish Stratus)! My final hope is that WWE gives her time to say farewell to the WWE Universe.  Few women can claim to have had a run in the WWE like Vickie Guerrero – she’s had a great run as a non-wrestling personality – and to that, I can only say Viva la Vickie!