For the 18th consecutive year, I present my selections for the Best of WWE.

It’s unheard of for a woman in the WWE to claim back-to-back titles as a Superstar of the Year. In 2019, “The Man” Becky Lynch transcended the WWE Women’s Division when she maintained her status as the face of WWE. Her momentum catapulted the women’s division to center stage at WrestleMania. She battled Ronda Rousey and Charlotte Flair in a “Winner Take All Match” in the first-ever women’s main event of WWE’s flagship pay-per-view. Lynch pinned Rousey, handing “The Baddest Woman on the Planet” her first WWE loss, and claimed the RAW and SmackDown Women’s Championships in the process. Since then, she’s reigned supreme.

Kofi Kingston had the Cinderella story of his career. He emerged victorious from a feud with Daniel Bryan and captured his first WWE Championship at WrestleMania. Kingston reigned for six months before a quick defeat at the hands of Brock Lesnar. Not one to stay down, Kingston reunited with The New Day and captured tag team gold.

Adam Cole had a year unlike most other superstars on any WWE roster. He endured a memorable feud with Johnny Gargano, competed in some of the highest stakes, most exciting matches of 2019, and cemented his legacy as a bonafide main eventer of the WWE. 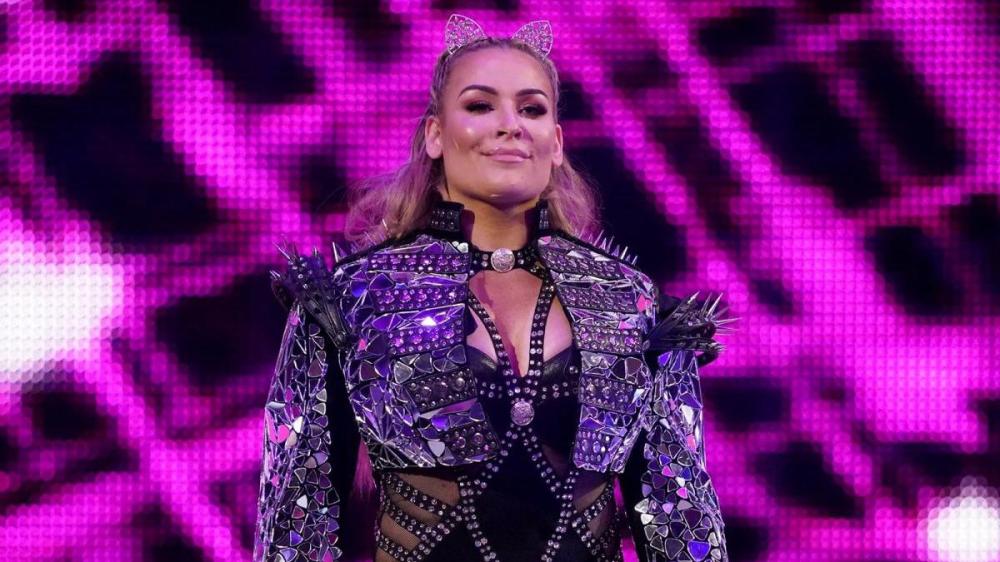 Finally. After more than a decade in the WWE, Natalya, WWE’s first third-generation female competitor has arrived. Natalya entered 2019 fresh off of a challenge to RAW Women’s Champion Ronda Rousey. From there, she memorably participated in the Women’s Royal Rumble match (lasting a record-setting 56:01), reunited with Beth Phoenix (the “Divas of Doom”) to challenge for the new Women’s Tag Team Championships at WrestleMania, rekindled a rivalry with Charlotte Flair and Sasha Banks, and broke down barriers as one of the first women to ever wrestle in the kingdom of Saudi Arabia (vs. Lacey Evans). It’s hard to deny that Natalya had the best year of her career.

“The Queen” Charlotte Flair continues her reign at the top of WWE’s women’s division, and as one of the main event stars. This marks the fourth consecutive year in the Bobby James Awards that Charlotte has earned this title (fifth overall if you count her 2014 NXT Woman of the Year finish). Last year, Charlotte became the first-ever 10-time Women’s Champion and delivered in a SummerSlam dream match against the legendary Trish Stratus (who tapped to the Figure Eight). “The Queen” is undeniable.

Rhea Ripley seemingly came out of nowhere (well, not nowhere, but from NXT UK) and catapulted herself into the title scene against Shayna Baszler. In her quest for the title, Ripley made history by competing in (and winning) the first Women’s War Games match. Her hard-hitting style and rising status culminated with her decisive defeat of the only 2-time NXT Women’s Champion Baszler for the title in December.

Feud of the Year | Adam Cole vs. Johnny Gargano

One word you need to know to describe this feud and their encounters: Epic. That’s all.

“The Man” Becky Lynch and “The Boss” Sasha Banks met for the RAW Women’s Championship inside Hell in a Cell. The match, Sasha’s second cell match, became an instant classic. Ultimately, Lynch prevailed, but Banks emerged proving exactly why she’s “The Blueprint” of the women’s division.

Tag Team of the Year | The Kabuki Warriors 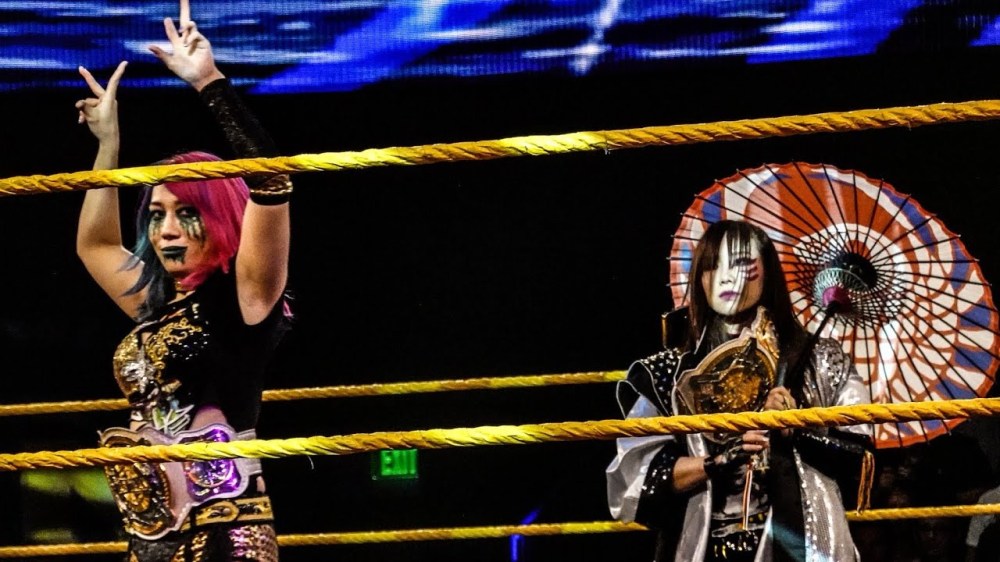 Asuka and Kairi Sane, The Kabuki Warriors, make history by becoming the first female tag team to claim this title. The team, thrown together mid-2019 and aligned with Paige, went from afterthought to main event – in the process becoming one of the most talked about teams in all of professional wrestling. Asuka’s momentum returned and had her entering a feud against “The Man” Becky Lynch heading into 2020. The Kabuki Warriors turned back challenges from Charlotte Flair and Becky Lynch – ultimately ending with Asuka atop a ladder in victory to round out the decade.

NXT Tag Team of the Year | The Undisputed Era 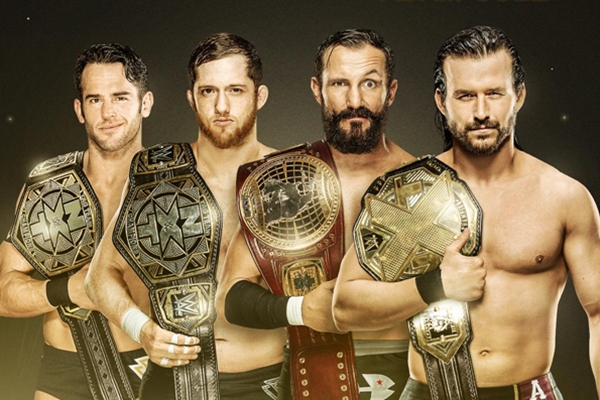 Adam Cole’s prophecy was fulfilled. The Undisputed Era claimed and held all of the gold in NXT. They are the force of the WWE – and one of the essential main events. This is the Undisputed Era’s third consecutive win in this category.

Moment of the Year
Trish Stratus vs. Charlotte Flair
SummerSlam
August 11, 2019
Toronto, ON

“The Queen of Queens” Trish Stratus battled “The Queen” Charlotte Flair at SummerSlam in one of the most anticipated dream matches of the decade. Sure, Stratus was 13 years retired, but that didn’t stop “The Queen of Stratusfaction” from delivering against WWE’s first-ever 10-time Women’s Champion. Flair vs. Stratus was a match and moment for the ages – and while it was never going to be prime vs. prime, it was generation vs. generation. Charlotte defeated Stratus with her signature Figure Eight, but it was the groundswell of the fans in Toronto and their outpouring of emotion at Trish’s final farewell that made this the moment of 2019.

Newcomer of the Year | Street Profits

Montez Ford and Angelo Dawkins (the “Street Profits”) mad their main roster debut in 2019. They immediately became main event players and some of the most entertaining performers on any show in WWE, and appear to be poised for a huge 2020.

Indy star turned hot prospect for WWE, Austin Theory, made his long-awaited debut near the end of 2019 – but the chatter surrounding his signing and debut, paired with his debut made him an easy choice to be the player in NXT. Stay tuned.

“The Legit Boss” Sasha Banks disappeared from WWE TV for four months following WrestleMania (when she and Bayley lost their Women’s Tag Team Championships). Rumors were rampant about her disappearance, with speculation that she’d never return to the WWE. Banks surprised the WWE Universe on August 12 when she returned and attacked Natalya.

Cruiserweight of the Year | Buddy Murphy

Dexter Lumis debuted on NXT television in 2019 with one of the most methodical, intentional, and unnerving yet captivating entrances of the year.

Valet of the Year | Lana

Lana proved her worth once more as one of the most charismatic performers in all the WWE. She was paired with Bobby Lashley to turn Rusev face and give Lashley a personality. Job well done.

On commentary, Beth Phoenix has seemingly found a home, and is comfortably adding to her already Hall of Fame legacy. “The Glamazon” had a one-off appearance at WrestleMania alongside Natalya (and on the shows leading up to their mania moment). Since then, she’s become one of the essential voices of NXT.

Most Improved Wrestler of the Year | Lacey Evans 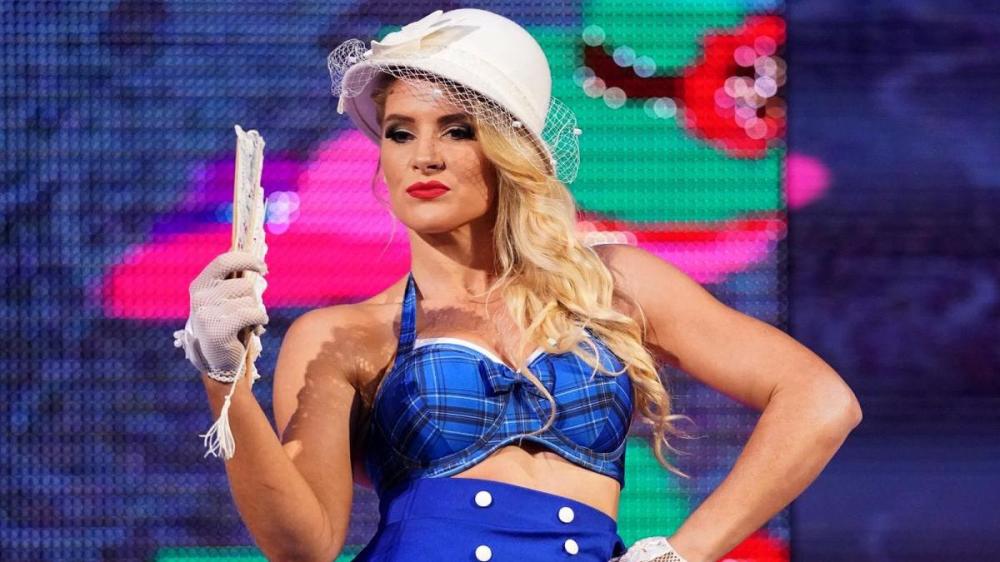 “The Sassy Southern Belle” Lacey Evans improved by leaps and bounds. She went from looking winded in early encounters on the main roster, to being a bonafide workhorse for the WWE. She’s challenged all top contenders and champions, and made history in Saudi Arabia alongside Natalya in the process.