Gymnast Gabby Douglas, of the United States’ “Fab Five,” claimed the gold medal in the Women’s Gymnastics All-Around final on the sixth day of Olympic competition.  Douglas’ four scores (15.966 [vault], 15.73 [uneven bars], 15.5 [balance beam], 15.033 [floor]) earned her the right to be called the best all-around female gymnast in the world.  Douglas’ team-mate Aly Raisman, who was heavily favored to medal almost did.  After she and Russia’s Alyia Mustafina had unfortunate balance beam rounds and when the dust had settled, they found themselves both in third place, with the same exact score.  The judges crunched the numbers and dropped the lowest score each of them had (balance beam), after which Mustafina edged out Raisman, leaving Russia with the silver and bronze.

Despite the US Men’s volleyball team advancing to the quarterfinals over Brazil, the pool was the place to be tonight though, as it offered yet another Lochte-Phelps showdown.  Lochte and Phelps found themselves competing against one another, just a day after winning a relay together, in the men’s 200 meter IM.  Many suspected Lochte would claim the victory, just as he did in the 400 meter IM.  But it wasn’t to be as Michael Phelps became the first swimmer to “threepeat” and win his third consecutive Olympic gold (though it was his first individual gold of the London games, his 20th Olympic medal overall).  Lochte earned silver.

One could argue that Lochte’s loss to Phelps could be partially contributed to him participating in the 200 meter backstroke final, which he had competed in just a half hour prior (though the argument would likely fall on deaf ears seeing as how Missy Franklin was involved in a similar situation just two days prior, yet she claimed gold with only ten minutes between swims).  Like the 200 IM, Lochte just didn’t have enough gas in the tank to finish gold in the backstroke final either – instead he claimed bronze and was surpassed by his fellow American swimmer Tyler Clary, who established a new Olympic record while winning his first Olympic medal.  But don’t feel too concerned for Lochte, these two medals gave him a total lifetime-Olympic medal count of 11, putting him in a position to challenge Phelps’ record should he be able to compete come 2016 in Brazil. 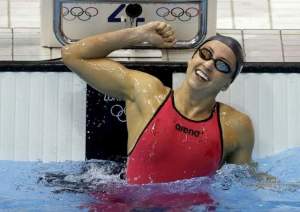 Finally, in the women’s 200 meter breaststroke final, American Rebecca Soni set a bunch of records while earning her golden medal.  Soni became the first woman to ever win back-to-back gold medals in the event, established a new world record (breaking her own world record she had just set on day 5), and swam the 200 meter final in 2:19:59 – the first ever under 2:20:00, barely!