Last night, I attended my first IMPACT Wrestling live event, and I must say, TNA sure does know how to throw a party.  More importantly, you heard it right, Bobby-james entered the Impact Zone (accompanied by Kacie)!  Let me first begin by thanking my friend Kris Long, who made it possible for me to visit – thank you, it was a great show.  Next, I’d like to bullet the highlights of my evening:

Now let’s give it a recap (for a quick listing of match results, scroll all the way down):

The show opened with Christy’s Hemme singing a nice rendition of the Star Spangled Banner (it actually had an edgy, singer-songwriter vibe to it).  We the people were then welcomed to IMPACT – enter “The Cowboy” James Storm, who was sorry about our damn luck.  Storm told a story about a child he’d met pre-show before challenging Aces and Eights to a Streetfight.  Two masked men came through the crowd and began the beat down, until Mr. Anderson made the save.  This, of course, resulted in Christy Hemme sending a message up the food chain to Hulk Hogan to see if “Cowboys and Assholes” could be booked in a tag match against the menacing masked men.  Meanwhile…

mme announced Earl Hebner as the referee for the bout.  Tara entered the Impact Zone, sans Jesse (who was “in Celebrity rehab with Dr. Drew”), and proceeded to run down the fans, whom she “was forced” to meet and greet earlier in the day at Direct Auto Insurance (the night’s sponsor).  She then said Earl could not referee her match because he was a “pervert.”  Out came Brian Hebner.  Tara, dissatisfied, said the Hebner family was full of perverts.  Then she warned Brian, “don’t look at my butt…because it’s already taken.”

ODB came out – flask in one hand, lady parts in the other – to challenge.  Tara and ODB started things with a lock up and some basic matt grappling.  The match went back and forth for a good while until Tara connected with the Widow’s Peak and scored the 1-2-3 to retain her Knockout’s Championship. 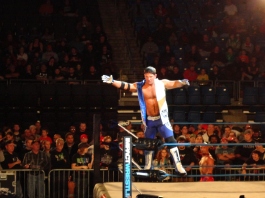 Christopher Daniels is out first, dressed for Halloween as Magneto.  Though this Magneto, as he explained amidst his constant hip thrusting, had animal magnetism (instead of metal).  He said he had the “rear that makes girls cheer, and hips girls want near their lips.”  Daniels gave the audience permission to worship him before orgasmicly exclaiming “You’re welcome” to the crowd.  Both the crowd and AJ Styles had heard enough and it was clear there was no worship to be had.  Hernandez rounded out the trio and the match of the night was underway.  Spot after spot, Styles, Daniels, and Hernandez delivered an awesome power hitting, high-flying match that ultimately ended with Hernandez pinning Daniels.

Christy Hemme introduced our next bout, beginning first with Bully Ray.  His opponent?  The only Olympic Gold Medalist in professional wrestling, Kurt Angle.  Unfortunately, this match was full of lengthy submission holds and a few stiff clotheslines.  Angle nailed Bully Ray with an Angle Slam and locked on two Ankle Locks before losing out to Bully in the end.  After the match, the two men showed some mutual respect, which drew applause from the crowd in attendance.

Christy Hemmed informed the fans that she’d heard back from Hulk Hogan and that James Storm and Mr. Anderson would face Aces and Eights tonight in a tag team match.

It was then noted that referee Earl Hebner marked a milestone in pro wrestling – he’s officially refereed over 100,00 matches – yes, you read that right, 100,00 matches – in his career.  To commemorate Hebner’s achievement, TNA was offering a shirt, which members of the audience could have signed by Earl and Brian Hebner for $10.

Christy Hemme welcomed us back to the Impact Zone and Direct Auto Insurance awarded one lucky fan $200 to spend on TNA Merchandise.

Match #4: “The Asshole” Mr. Anderson and “The Cowboy” James Storm vs. Aces and Eights 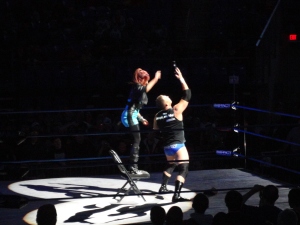 Pre-match, Mr. Anderson came out and had a little fun with the crowd.  During his into, he reached out and waited for his mic – but to his surprise, there wasn’t one.  Being Mr. Anderson, he conspired with Christy Hemme and improvise a solution.  Christy got a chair from ringside, stood on it, and “dropped” the mic into Mr. Anderson’s hand – classic.  Anderson talked about all the assholes in attendance and the “douchebags” they were about to face (this started a “douchebag” chant).  Anderson was then joined by his tag team partner James Storm.  Anderson teased a kid with his shirt and then threw it down in the ring (didn’t give it to the kid) so I yelled, “Asshole,” and Anderson and Storm were quick to point out the word “Asshole” printed on Anderson’s tights.  There was one moment in particular, while  talking to a section of the audience, he asked if there were assholes in the crowd – he then told the kid that yelled back, “You’re too little to be an asshole…you can be a…a… little butthole.”

A trio of Aces and Eights members made their way through the crowd ready to go.  As they delayed their in-ring entrance and slowly began removing their coats the crowd chanted “Take it off!” Mr. Anderson, teased taking off his trunks before Storm saved the day

and said, “Whoa, you’re not Magic Mike, you’re an asshole…these people are telling them [Aces and Eights] to take their jackets off, they’re shouting “Jacket-off.”  Then a loud “Jacket-off” chant started before the bell finally sounded.

There was a fair amount of back and forth action, but Aces and Eights double, and triple-teamed James Storm for a bit before Storm was able to make the hot tag.  Interesting moment when a woman in the front row stood up and wanted to fight the big masked man – “The Cowboy” made the save.  Anderson finally got the tag, and from then on, the match was academic.  Mr. Anderson scored the pinfall for the team and sent Aces and Eights packing like a pack of scalded dogs.

“The IT Factor,” Bobby Roode vowed to embarrass Jeff Hardy, like the Giants did the Cardinals, and said he was leaving St. Louis as the TNA Heavyweight Champion.  Jeff Hardy entered to thunderous applause and the match was underway.  Roode gained the early advantage and kept Hardy grounded and on defense the first half of the match.  Roode locked in a lengthy Figure Four Leg Lock, which Hardy eventually escaped amidst the  “Woo’s” coming all directions.  At one point during this submission, a kid stood up and yelled to Bobby Roode, “You’re mother’s not proud of you.” From that point on, it was an evenly contested bout that saw Hardy hit many of his signature moves – the last of which was

the Twist of Fate to secure the win.

Overall a fun show.  I’m really excited that I had the chance to meet three great wrestlers and be in attendance with another.  I simply must also rave about TNA’s amazing merchandise offer.  For $50, I got the ten-year anniversary program (which I had signed by Anderson, Styles and Hardy), three action figures (Matt Morgan, AJ Styles, Jeff Hardy), four DVDs (Best of the X-Division 2-disc set, Best of TNA 2007, and Bound for Glory 2011), a drawstring bag, an “Est. 2002” TNA T-shirt, and to meet three members of the roster – that is what I call a deal and complete fan-appreciation – good job TNA.

The only real disappointment for me tonight was the relatively boring and unlively crowd in St. Louis.  Come on St. Louis, next time we can (and should) do better than that.  Wake up people – take an energy pill, have a red bull, go skydiving and boost that adrenaline, because next time, I don’t want the silent treatment – it’s bad manners.  This show was fun.  Some of the matches were slow in spots and most were slow to get started, but all things considered, IMPACT Live is a great, great value!  Bravo TNA, bravo.  See you next time! 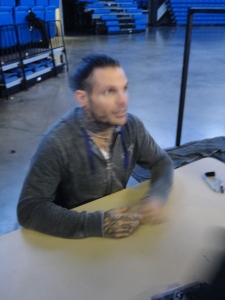 Forgive some of the photo bluriness please, I was only mildly excited to meet someone (Jeff Hardy) whose career I’ve followed for the last 11 years…. Yes, I flashed him the TeamXtreme hand signal, like a dork.  What?  I couldn’t control my inner-child – Hardy’s one of my favorites.  AJ Styles was really cool too.  Was really awesome to meet one of the men responsible for growing TNA Wrestling and the current champion… let’s get that feud going now!