Let’s get the obvious out of the way, 2013 was a great year for television.  From online subscribers and original programming (ex. House of Cards on Netflix) to big networks and premium cable programming (ex. Masters of Sex on Showtime), television was sexy, bloody, edgy, fun, dark, and thrilling  – after all, everyone’s competing for advertising revenue, social media presence (since the Nielsen ratings system was modified), and above all, viewers.  Here are my selections for the BEST of 2013: 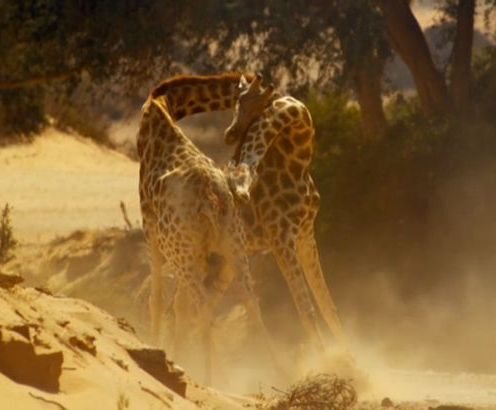 Featuring and epic encounter
Developed by BBC Earth and brought to American viewers by Discovery, Africa allowed people to enjoy all that is Africa – from her Serengeti, to her deserts, and jungles – the continent is teeming with some of the most breathtaking life on the planet.  High production values gave viewers unprecedented glimpses into another world – and cameras captured some of the most amazing encounters ever recorded (anyone remember the giraffe fight?).  This is Africa – and she is wild, mysterious, and beautiful.  Runner Up:  North America (Discovery) 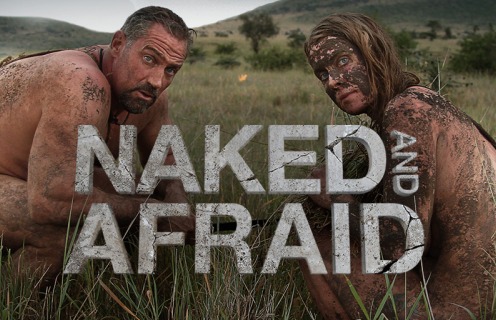 Billy Berger in the Louisiana bayou

The concept was simple enough – drop people into the wild, take away their clothes, and ask them to survive for 21 days.   The show was a success and obviously intriguing because the second season of Naked & Afraid debuts on Discovery this year (?). Each wilderness (Borneo, Africa, Louisiana, etc.) came with its own set of unique challenges that physically and psychologically tested the participants – some survived, some were forced out by mother nature (infections), and some called it quits.  Despite an episode or two falling flat, the people were genuinely interesting – and some of the situations were cringe-worthy (ex. Billy and Ky had to confront the absence of dry land, and an excess of alligators and cottonmouths in the Louisiana swamp – Ep. 8).  Runner Up:  The Hero (USA)

She’s quite the lumberjill, right?

Nikki Bella, WWE Diva and star of E! Total Divas knows a thing or two about creating a dynamic character.  A former Diva’s Champion, Nikki is one of WWE’s top Divas – full of life, fire, personality, and of all other things on a TV-PG program, sexuality.  Whether she’s mixing I up in the ring, rehabbing an injury, talking about her “purple people eater,” or interacting with her boyfriend John Cena, Nikki makes for compelling television – she’s likeable and identifiable – making her the personality to watch in reality television.  Runner Up:  Jimmy Riffle (Gator Boys, Animal Planet) 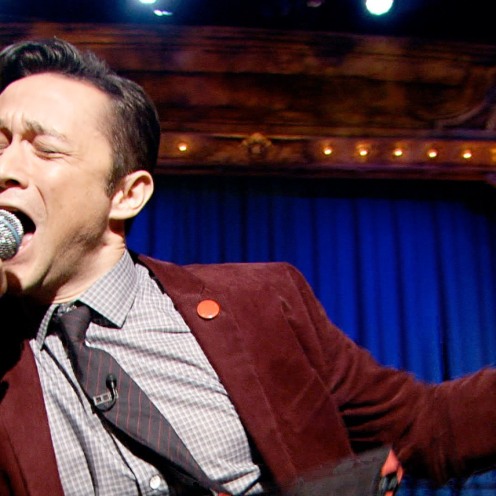 JGL in the Jimmy Fallon sing-off

It’s obvious that Jimmy Fallon is having fun before he taking over the Tonight Show for Jay Leno (on February 24, 2014).  His show featured big-name guest stars and comedic highlights (how about that sing-off featuring Joseph Gordon-Levitt) – which usually equated to must see TV.  Runner Up:  Jimmy Kimmel Live! (ABC) 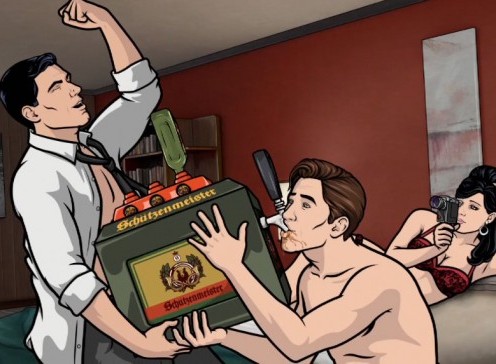 Well this is homoerotic, isn’t it?

The Bond of cartoons, Archer is adult humor at its finest.  Assassinations, sex, drugs, betrayal, cartoon nudity – you name it Archer’s got it.  It’s edgy, funny, and many of the situations are ridiculously outlandish, but that’s okay – because Sterling Archer is animation’s most outrageous international spy – and he does things we all secretly wish we could do. Not to mention there’s Lana.  Runner Up:  The Awesomes (Hulu)

Comedy Series of the Year

I’m not sure if I love The Goldbergs because of its retro-80s style or if because Beverly Goldberg (Wendi McLendon-Covey) reminds me a lot of my own mother! It’s a fun, situational comedy that’s totally identifiable with just the right amount (a pinch, usually) of melodrama.  While some the show’s life lessons are caked with comedy, others have a deeper, more moving meaning.  What’s better is that this show features actual footage from show creator Adam F. Goldberg’s life during the end credits – this stuff really happened! How fun.  Runner Up:  Orange is the New Black (Netflix)

American Horror Story is known for its creepiness, high production quality, and most of all, for its ensemble cast, which added Oscar winner Kathy Bates and Oscar nominees Angela Bassett and Gabourey Sidibe.  This orgasm of casting led to stellar interactions and the vivid and multi-dimensional portrayals of some of history’s dark historical figures – not to mention, watching series regular Jessica Lange go toe-to-toe with Bates and Bassett is any film/tv buff’s dream come true.  The writing is superb and the themes this season are gut-wrenching and jaw-dropping (incest, rape, bestiality – to name a few).  Runner Up:  Bates Motel (A&E) 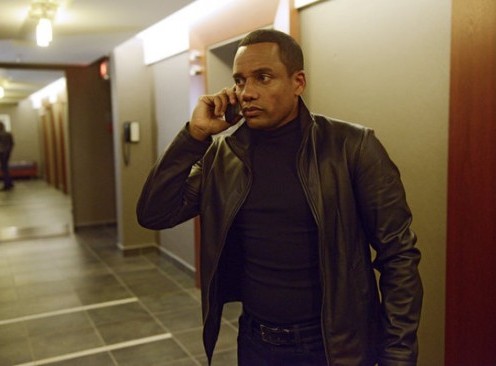 Drama of the Year

Annie Walker (Piper Perabo) and company returned for an explosively tense, and nail-biting fourth season, the series’ best ever.  This season gave viewers a final chase between Annie and her nemesis Henry Wilcox (Gregory Itzin).  Full of twists and turns and constant bombshells, the writer’s teased episodes that “changed everything,” then delivered on their promises. The fourth season premiered with Annie Walker’s death (who kills their main character!?), then backtracked to build up to the pivotal scene.  Adding Hill Harper (as Calder Michaels) to the cast allowed relationships to be tested, and people to be shifted to new positions – amidst the backdrop of the “darkness” that overcomes Annie.  Despite it’s drastically darker tone, Covert Affairs remains one of the sexiest spy dramas with award-worthy performances from its ensemble cast – and leaves much uncertainty for the upcoming season five.  Runner Up:  The Americans (FX). Spartacus: War of the Damned

Marcus Crassus was the most imposing villain in Spartacus since Lucretia (Lucy Lawless) – all thanks to Merrells.  Merrells’ commitment to the role made him a show-stealing actor, he outshined not only the rest of the cast, but the rest of this year’s supporting actor contenders.  He was poised and confident, yet unstable and dynamic – all traits that allowed him to transform into the most deadly foe Spartacus would ever face.  Runner Up:  Gregory Itzin (Covert Affairs, USA) 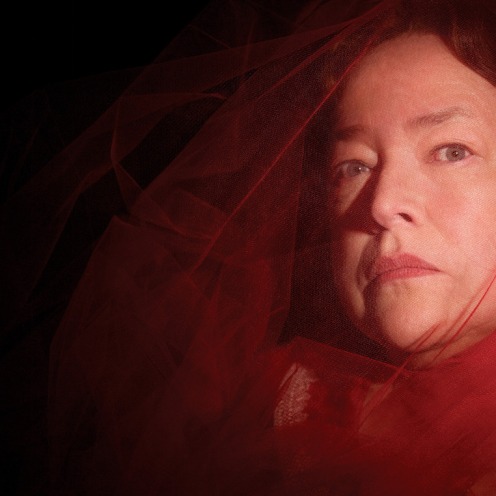 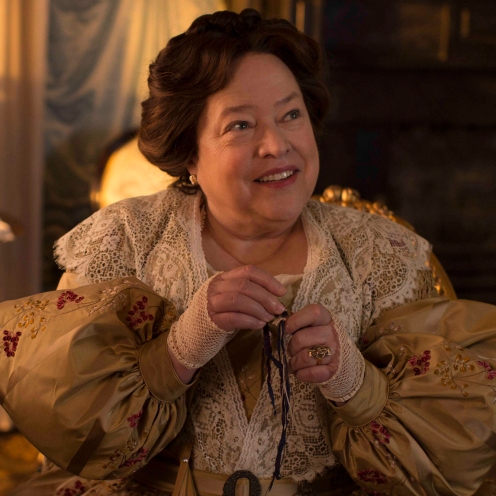 From the moment I read Kathy Bates was cast as Madame Delphine LaLaurie, one of the most notoriously sinister women in New Orleans history, I knew that a special performance was about to occur.  Coven’s chilling opening monologue featured Bates’ character doing heinous things, and from then on, her performances have been flawless – and dare I say, better than her Oscar-winning performance in Misery (1990).  The way she makes eye contact with the camera while smearing blood on her face, or the way her voice sounds (southern with a hint of French) while she’s telling one of her gory stories, Bates was a brilliant casting choice and in turn delivers a horrifying performance!  Runner Up:  Frances Conroy (American Horror Story: Coven, FX) 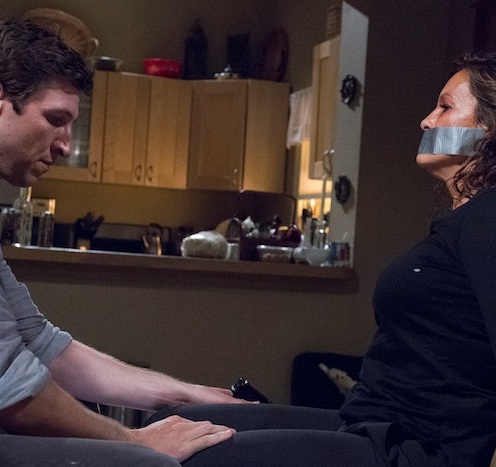 Guest Star of the Year

Pablo Schreiber’s “William Lewis” is one of the best menacing and psychologically disturbing characters on television right now.  His torment of Olivia Benson has been an ongoing affair and his mannerisms and speech are most unsettling.  Schreiber has a chemistry with series regular Mariska Hargitay that makes for tense viewing and is some of the series’ best ever.  He’s crafted an unforgettable villain who’s sure to haunt the Benson character and audience alike.  Runner Up:  Angela Bassett (American Horror Story: Coven, FX)

Actor in a Leading Role:  Matthew Rhys – The Americans (FX) 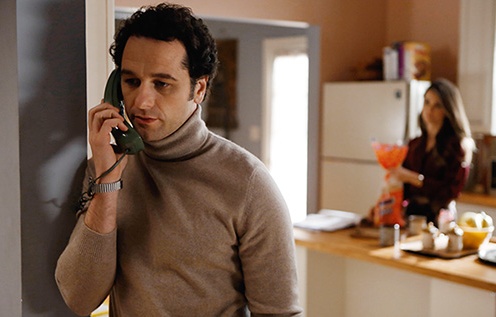 When you’re a spy, you’re asked to play many different roles – and to be many different people.  The physical transformation (mostly hair) that Matthew Rhys undergoes on a routine basis in The Americans is incredible.  His voice and mannerisms change alongside his temperament – making him one of the most intriguing characters on television.  “Phillip Jennings” is a secret identity – and after season one, I have a feeling we’re just beginning to delve into the darkness that he could be. Runner Up:  Alexander Koch (Under the Dome, CBS)

There is no question that Kerry Washington can act – but as “Olivia Pope,” she’s gold.  She handles massive amounts of dialogue like nobody’s business and she’s a layered character – who can be strong and determined just moments before having an emotional, vulnerable break.  Washington is amazing, her range is impressive.  She becomes Olivia Pope and viewers buy it – Olivia first, Kerry second.  Bravo Ms. Washington, bravo.  Consider the character, and scripts, “handled.”  Runner Up:  Piper Perabo (Covert Affairs, USA)

Do you agree or disagree with my 2013 selections?  Post your thoughts in the comments or reply to the shares on social media.  I’m interested to know.