Ahead of tonight’s Gardeners of Eden premiere on Pivot TV, as promised, I’ve made a donation to The David Sheldrick Wildlife Trust. With 25% of my earnings and a base donation, I’ve renewed my fostering of Rorogoi for another year.

If you’ll recall, Rorogoi was rescued by the Sheldrick Wildlife Trust on October 10, 2013. While browsing through the orphans last year, I felt an immediate connection to Rorogoi’s name and spirit. I then read her story – about how she’d been orphaned following a poaching incident, survived on her own for over a month and wandered onto a farm. The farmer made the call and Rorogoi was saved. Then, I saw she shared a birthday with my late Grandma Sarah (August 10) and I knew in that moment, Rorogoi would be my little baby elephant.

Browse the Orphans and Foster one of your own? ($50 USD min.)

Since my fostering began, through the monthly Keeper’s Diary updates, I’ve learned that Rorogoi is a mischievous little one (much like me!). She’s moved from being excited to meet new arrivals to forming alliances (usually with Lentili) and bullying them. I’ve also learned that she hates being bathed in coconut oil, doesn’t like being mounted by persistent bulls and that she likes to taunt lone buffalos in the bush.

Recently, I’ve learned that Rorogoi (along with a group of other growing orphans) is being moved to the Voi Rehabilitation Unit, where she will begin her training for re-introduction into the African wild. This is an exciting time for Rorogoi – and I’m proud to be part of her journey for years to come.

Read on to discover just what this mischievous elephant’s been up to:

This afternoon Mbegu was having a lovely time, head down in the mud pool blowing bubbles and making funny noises, when Rorogoi ran into her from behind shoving her into the water where she gave a loud squeal. Rorogoi, knowing that she was in the wrong, quickly continued off into the bushes to hide. – Keeper’s Diary (2/21/15)

Lentili and Rorogoi are still bullying Siangiki our new little arrival. Whenever she approaches the rest of the older herd they try and push her away…Today she received some help from Arruba who came to her rescue when Lentili and Rorogoi tried to squash her against a tree. Arruba heard her squealing and quickly pushed off Rorogoi sending her running away before turning back to deal with Lentili. – Keeper’s Diary (2/10/15)

Finally, here are some pictures of little Rorogoi from the past [near] year: 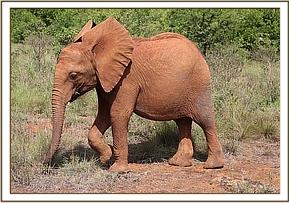 Rorogoi flushing out a Buffalo! – December 2014 – photo courtesy of DSWT 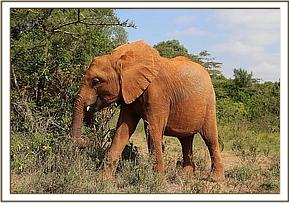