Your second edition of the 2015 Bobby James Awards is for TNA Impact Wrestling. Time shall not be wasted, let’s get ready to rumble!

X-Division Wrestler of the Year
Manik

Love him or hate him – but I’m guessing most of you love him, Manik was one of the most exciting Impact Wrestling stars to watch in 2015. Despite not capturing the X-Division Championship, Manik was part of some of the year’s biggest moments. As a member of The Revolution, Manik worked alongside group leader James Storm in noteworthy feuds against The Hardys and later Magnus and Mickie James.

As the year drew to a close, he left the heel faction for greener pastures and competed valiantly in the World Title Series, which took place between October and December. A shining X-Division star, Manik is one to watch in 2016 – with an X-Division title reign in his sights?

Non-Wrestling Personality of the Year
The Pope

The Pope (D’Angelo Dinero) was the most exciting person to listen to on Impact Wrestling broadcasts in 2015. From his crazy, and sometimes wild predictions in the World Title Series, to his off-the-wall commentary (said: “souflée daddy!” / translation: “suplex!”) and antagonism of co-commentator Josh Mathews, Pope had a colorful year at the booth – and as a viewer, I appreciate – and understand him.

Most Improved Wrestler of the Year
Ethan Carter III 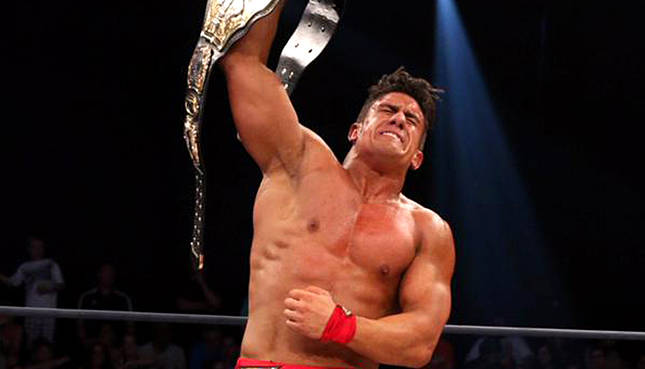 In this award’s inaugural year there was no one better to be crowned “most improved” than Ethan Carter III. EC3 had an incredible year – and he’s still unpinned and unsubmitted – undefeated! The title reign he endured cemented him as a main event talent in TNA. What he did with that reign – from mic work to ring work – cemented him as one of the greatest main eventers in the entire industry.

June 25, 2015. That’s the day Jeff Jarrett infamously returned, with wife Karen Jarrett by his side, to Impact Wrestling. Yes, you read that correctly. It was perhaps one of the most shocking moments in professional wrestling history. The circumstances of his departure from TNA were “cloudy,” but his return to be inducted into the TNA Hall of Fame is now infamous.

Jarrett’s return brought an invasion angle with it. His new promotion, Global Force Wrestling (GFW), ran roughshod over the Impact roster through the summer. They had Lei D’Tapa wreaking havoc in the Knockout’s division, Trevor Lee and Brian Myers winning the Tag Team Championships from The Wolves and PJ Black winning the King of the Mountain Championship.

Jarrett’s return created a level of drama that has been missing from pro wrestling – and there were moments when I felt like the feud between TNA and GFW was uncomfortably personal and unpredictable. Following his induction, the Jarretts and GFW were soon out and Impact moved into the World Title Series.

EC3, World Heavyweight Champion of TNA at the time of GFW’s invasion, remained on the outside looking in. He didn’t meddle too much in the angle, except to call out Jarrett and subsequently defeat PJ Black in a battle of supremacy. Ethan Carter’s words and delivery (along with the confidence he exuded) made this line the mic moment of the year:

Jeff Jarrett – send me your very, very best and I shall sacrifice them on my altar of perfection! – EC3 (Aug. 19)

Perhaps it seems simple – but moving into 2016, EC3 remains undefeated, GFW is gone and the altar of perfection is well intact.

Tag Team of the Year
The Wolves

Eddie Edwards and Davey Richards remain the greatest tag team in wrestling today. Their chemistry is unmatched, gimmick rock solid and their ring work is unparalleled. They are two of the most exciting wrestlers on the planet – and I figured it’d be hard for them to top 2014’s encounters with Team 3D and The Hardys, but they managed.

This year, The Wolves were the focal point of TNA’s tag team division. They had memorable encounters with The Hardys again, albeit brief – but their true ring work was on show against GFW’s Trevor Lee and Brian Myers and against one another in their epic singles encounter in the World Title Series. I can’t wait to see what next year has in store for the 5-time TNA Tag Team Champions.

Runner Up: The Revolution | 2014 Winner: The Wolves

Honestly, this wasn’t surprising. Gail Kim is a mat technician and one of the most respected women’s wrestlers in the world. Her work speaks for itself. Rockstar Spud on the other hand, is the ultimate underdog and has tons of charisma. In 2015, he flirted with the main event title scene – a place he seems destined to go.

Rookie of the Year
Drew Galloway

Upon his arrival, Drew Galloway made his presence felt. He feels like a main eventer – and I’m sure that’s where he’s headed in the near future. The intensity he brings is a welcomed sight – as was his brief faction “The Rising.” Though it fizzled quickly, Galloway’s commitment to the fans never did. His “Stand up” movement gained traction, popularity and a following. Now, I’d like to see him turn heel and rise to the top.

Feud of the Year
Ethan Carter III vs. Matt Hardy 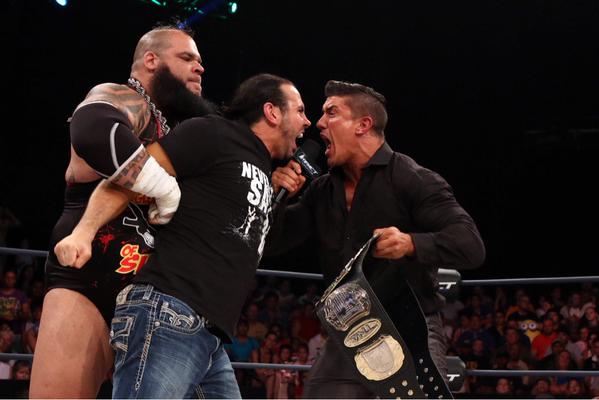 EC3 vs. Matt Hardy was built over several months. As a result, the fans had a vested interest. When their feud became personal, it felt personal. The animosity and thirst for destruction seemed real. I hope EC3 vs. Hardy is reignited when one or the other becomes TNA World Heavyweight Champion on January 5, 2016 in the World Title Series finals.

EC3’s mic work has carried the vocal aspect of the feud, while Matt Hardy’s 20+ year career and the curious absence of world title reigns makes him the one fans love to cheer. It’s dynamic and competitive – and that’s why this has been the feud of the year.

The TNA World Heavyweight Championship was contested in a brutal Full Metal Mayhem. It was an unpredictable encounter that saw EC3 sent through a table with a leg drop, Matt Hardy stuffed inside the steel stairs and ladders used to their highest potentials. From groin shots and powerbombs, to bodies crashing overtop ladder propped on the apron – this match had everything for pro wrestling purists and hardcore enthusiasts.

…and just when EC3’s title reign and undefeated streak seemed to be in jeopardy – he pulled out all the stops and retained his title.

Gail Kim and Awesome Kong have had a career-spanning (in TNA) rivalry. The two are synonymous with Impact Wrestling and each other. They put a women’s division on the map in TNA, and created an atmosphere that allowed for a “Divas Revolution.” Their work rivals that of their male counterparts, so seeing them battle for the Knockout’s Championship, or join forces against Taryn Terrell’s Dollhouse or GFW’s Lei’D Tapa, was a treat that reignited passion for their history.

When the World Title Series was conceived, and the Knockouts were announced as an eligible group, it was a forgone conclusion that Kong and Kim would be the two representatives. Gail Kim challenged (unsuccessfully) the X-Division Champion, Tigre Uno in the Round of 16 – and Kong challenged (almost successfully) Jessie Godderz. Both women competed valiantly and either would make a believable World Champion.

There is no denying that 2015 belonged to Ethan Carter III. As I’ve stated already, EC3 is a main event performer. He’s dynamic and entertaining on the mic, his antics are classic heel and his in-ring work is damn good.

I’ve been a wrestling fan for well over a decade and I can say, in just two years, EC3 has become one of my favorite competitors in all of wrestling, ever. I think he just gets it and has it. He is the man in TNA Wrestling and his transformation from spoiled rich kid to headliner has been a special thing to witness.

His potential is endless – and as I’ve said already, I think he’s one of the best characters – and performers – in the business today. I think you could pluck him from TNA and put him across the ring from John Cena – and you’d have the new face of the WWE. But this is TNA after all, and on the shoulders of EC3, I think WWE could very well find itself with some competition sooner than later.