Wishes in Winter, featuring “Bero” and “Majola,” is the official 2018 Bobby James Christmas card. If you haven’t had the opportunity, please take a moment to meet them – then below, discover how my painted foxes came to life. 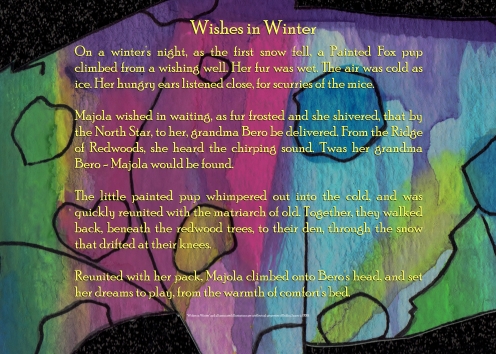 “Painted Foxes”| On October 1, as part of my effort to participate in “Inktober,” I sketched a pair of playful pups (because my friend Heather loves dogs). My pups were meant to be a hybrid of an African Painted Dog and a Fox. I decided then that “Painted Foxes” would likely cover my eighth annual holiday card. I needed a better sketch and, most importantly, an accompanying story.

Story + Naming | For three weeks, I struggled to develop the narrative for the card. I began six separate drafts of the story. Two paragraphs into the sixth draft (which I could have been satisfied with), it hit me! I knew the story I wanted to tell, which meant the draft in hand would be scrapped.

In May, my beautiful niece Malia was born to my brother Josh and sister-in-law Lauren. Malia came into the world with a loving family eager to meet her, but perhaps no other two people, beyond her parents, were as eager as the grandmothers – my mom (Beth) and Lauren’s mom (Rhonda).

The naming process for my characters was relatively obvious rather quickly. I wanted original names that honored the people. “Bero” is a fusion of Beth-Rhonda. “Majola” is a combination of Malia-Josh-Lauren.

This year I wanted to revisit the grandmother-grandchild relationship (which is featured in “Fluff & Hum: A Fireside Miracle,” 2016). I hope the story has captured the beauty and strength of that incredible bond.

The Process | Wishes in Winter is the most labor-intensive card I’ve crafted to date (…but the people its dedicated to are worth it). I experimented with new mediums (ink brush pens, oil-based paint markers), and revisited some I’m relatively unfamiliar with (watercolors).

The early drafts of “Bero” and “Majola” either didn’t meet my expectations – or a number of people told me my “Painted Foxes” looked like … pigs. As I’ve been known to do a number of times, I scrapped the works entirely, except one.

The week before Thanksgiving, I was inseparable from this project. I knew I had a deadline and had to print before vacationing in California. I redrafted the “Painted Foxes” and splashed them with watercolor (an idea inspired by a piece of work I saw over the summer).

I cut around the figures, emboldened the lines and put them on a shimmering black and white paper. The snowflakes at the bottom of the image are punched out of the old works and attached to strips of paper glued to the base. I wanted bold, vibrant color – to represent life and light in darkness.

The text on the front needed to be simply stated. The story on the back was originally intended to be set on black. However, I minimized the image, to the bottom right corner. When I came back, the image was zoomed in. I’m still not sure how or why – but  I loved it. I reoriented “Bero,” so her heart spot was visible near the moment of the story, “…and was quickly reunited with the matriarch of old.”

When they were “done,” I finished their works by adding final touches. Kaylee colored a unicorn (to which I added a blue background and “cotton candy clouds”). Cody and Ryker didn’t complete their projects, so I combined both in the center as one image. Lucas colored a reindeer, which I outlined (and ended up being quite fond of). The “Kayleecorn” and Lucas’ reindeer also feature snowflakes, a tie-in to Wishes in Winter.

As an added bonus, here’s the Recipe for Christmas: 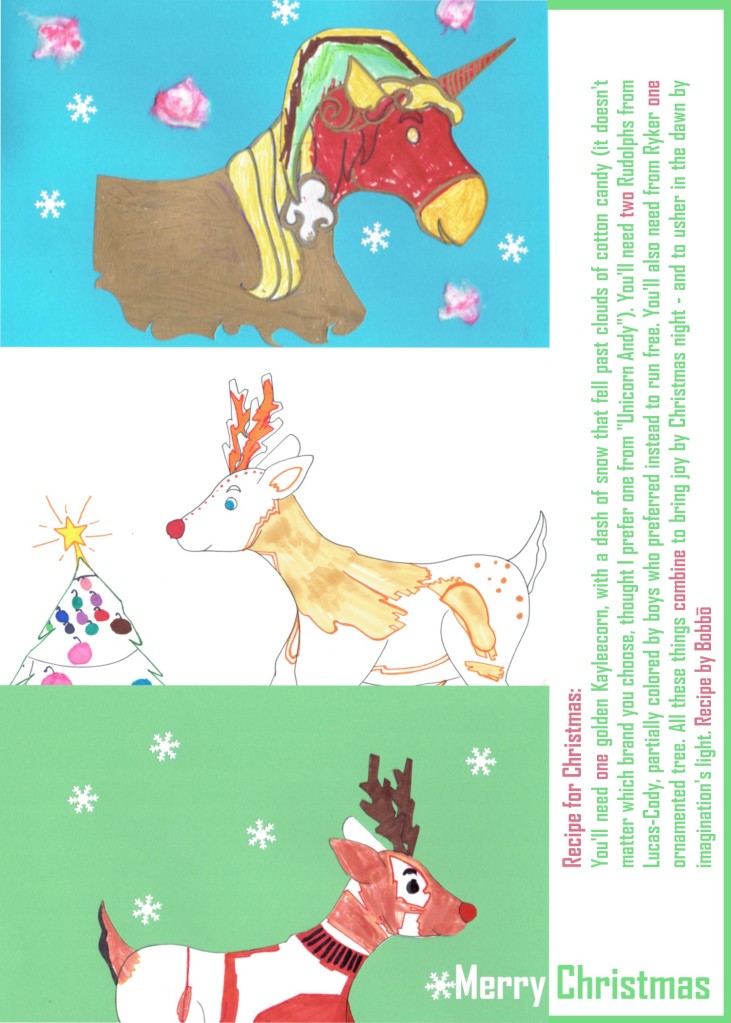