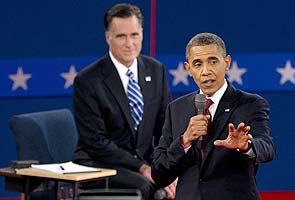 President Obama and Governor Romney met in their second debate, a town hall, moderated by Candy Crowly.  Compared to their last encounter, this debate maintained some similarities, but was vastly different in tone.

Let me first say this:  I found many of the questions to be posed stereotypically – I’ll explain.  The “jobs” question was asked by a 20-something college student, the immigration question asked by a Latina, and the ‘What have you done?’ was asked by an undecided black voter who said he didn’t share the same passion for Obama that he did in 2008 – cliché?  Absolutely.

Tonight, while Governor Romney regurgitated much of what he said last week in his avoidance-based introduction, while continuing his anti-bird agenda.  Last week he launched an attack on Big Bird, this week he made his unfriendly conservation status quite clear.  While criticizing Obama’s decrease on permits and licenses to drill for oil, Romney said, “20 or 25 birds were killed…” (is that insignifcant? Were they endangered? Birds mean nothing? … what) before citing a conservation-based movement was enacted to protect the birds.

What kind of birds?  Not sure, but one may question, why Romney has a hidden agenda against birds.

Romney stated that permits and licenses for domestic drilling were cut by 50% under Obama’s administration, to which the President replied, “you use it [public land] or lose it,” maintaining a position that permits were granted to be used, not saved for later dates and the benefit of oil companies or manufacturers.

A later question focused on pay-discrimination for women in the workplace.  Governor Romney mentioned his “binders full of women,” which he used to recruit and employ qualified women.  Unfortunately, Romney surely alienated some female voters by citing “cooking” and “caring for their children” as reasons why women need flexible schedules (guess men aren’t responsible for those tasks in the Romney house) and as likely contributing factors to unequal pay.  In response, President Obama firmly stated, “We do not tolerate discrimination for women.”  Obama’s firm stance remained.

Question to Obama:  “What have you done?”  Obama cited job growth and his unyielding commitment to working for the American people everyday.  Romney said Obama was, “great as a speaker” but that the American people, “have a record to look at.”  Interestingly enough, by this (the sixth question) point, Romney had offered little insight into his oft-referenced “plan” which begs the question:  Without a plan, what of Romney’s (besides tax documents) do the American people have to look at?

On immigration policy, Romney’s grand idea was to offer green cards to skilled foreigners, so they may be put to work in America, while offering no amnesty and promoting “self-deportation.”  That entire train of thought is a joke!  How does one grow the American economy and create jobs for qualified Americans while recruiting “skilled” foreigners and awarding them green cards?  How do you offer no amnesty and promote “self-deportation” while not being in favor of “rounding people up”?  Who is going to deport themself?  In fact, when Candy Crowly said, “Let’s speak to self-deportation.” Romney replied, “No.”  I wonder why.

On the same issue, President Obama proposed immigration reform be streamlined and that people have a “pathway to citizenship,” while referencing America’s immigration-based establishment.  It was during this segment that an unruly Governor Romney was told by Candy Crowly,

“Sit down Governor Romney, thank you.”

Following immigration, the often-referenced topic of Libya was reached.  Governor Romney’s biggest blunder came during this segment.  He declared, and was corrected by President Obama and Candy Crowly, that President Obama did not call the attacks in Benghazi an act of terror.  Romney was referred to the transcript, where Obama said he gave a statement to the American people from the Rose Garden.  During this question, the President scolded Romney saying, “You don’t use national security for political points,” before saying, “the suggestion that anybody on my team would play politics [with the Libya attacks] is offensive.”

The debate then flowed into how the government will combat domestic attacks involving assault rifles (ex. AK-47s).  President Obama emphasized the importance of education in a person’s development and Governor Romney took the point a step further and said, “We need Mom’s and Dad’s helping to raise their kids,” before suggesting violence reduction would come from people being married before having children.  Confused?  I was too.

The last question pertained to manufacturing jobs in the United States, and China’s growth to being the manufacturing leader of the world.  Governor Romney said,

before stating that on day one he will label China a currency manipulator and [if needed] impose tariffs on Chinese trade.  President Obama on the other hand said the solution is to attract jobs back to the United States by lowering corporate tax rates and citing an increase in American exports during his first term in office.

Finally, to the perception of their character, Governor Romney said he cares about “100% of the American people” (contrary to his 47% remark) and said that his “passion flows from the fact that I believe in God,” before spouting off with a last-minute tangent of desperation to “get America working again.”  President Obama said he believes in free enterprise, rewards for risk, and in fair shots on even playing fields for everyone – he said, “I want high wage, high skill jobs…I want manufacturing…for the future.”

1) Looks like Mitt Romney would have a busy first day in office.  To date, “on day one,” Governor Romney is going to (1) Repeal “Obamacare, (2) cut funding to PBS (and Big Bird), and (3) label China a currency manipulator who’s been advantageous of the American marketplace.  If that’s not a recipe for failure, then it’ll be a long day for Mitt Romney.

2) I’m disappointed that the social issue of marriage equality wasn’t touched upon.  Governor Romney said violence could be reduced if people were married before they had children, yet he never said who should marry or raise children.  Should irresponsible heterosexual adults be able to pop out babies on a whim and dump them in foster care while social inequality dictates against marriage and adoption equality?

3) President Obama was more vested and lively in this debate.  Governor Romney avoided questions, repeatedly interrupted and remained highly condescending, especially toward Candy Crowly… guess she’s not in one of his “binders full of women.”