It seems like just yesterday I was presenting a Christmas card, and telling you the story behind these little pieces of my heart. Last year, I presented “Fluff and Hum: A Fireside Miracle,” a card forged by fate that carried a great deal of emotion.

A Feminist Symbol | As I marched through the streets of St. Louis on January 21, 2017, as part of a global movement historically to be known as the “Women’s March,” I knew this year’s card would feature a feminist symbol with a theme of resistance.

She needed to be strong – to convey my sense of feminism – to convey my commitment to defending those (people and animals) who need it most – and to be a beacon of hope.

There was one animal I had in mind – an animal that is highly, and aggressively territorial, a defender and protector but also a fearless mother and feminine symbol of fertility – she is a hippopotamus.

Naming and Personal Connections | As I do every year, I try to establish names that are memorable – though some may be a bit tricky to pronounce (remember Piph, the snow white elephant – pronounced “Piff,” or “Pato” the Brontosaurus – pronounced “pat-O”).

This year is perhaps the most challenging of all: “Matumaini.”

The Swahili word for “Hope,” Matumaini became the driving force behind the story. Not only would I feature a feminist symbol, but I needed her to be a fierce defender of what’s good in the world – of the light that seems lost in darkness. I needed her to be a beacon of hope.

The Hippo that almost was | Matumaini as she was initially designed sort of resembled a pig. I realized then, I needed a point of reference. A quick google search gave me more than enough and within an hour, I had several different options: a ballerina, a plush toy, a semi-cartoonish hippo and one or two others.

Then, when Erin came for her visit, we had wandered (well we didn’t really wander, we bought tickets first) into the King Tut exhibit at the St. Louis Science Center after visiting the Zoo. Little did I know then that I would be so inspired.

Initially, Matumaini was designed to reflect the beautiful Egyptian art and textures I observed throughout the exhibit. But before Matumaini could be drawn in her final form, she needed a story.

A Day in the Park | I remember the day I wrote “Matumaini” being mostly sunny and brisk enough for a light jacket or sweater. It was a perfect autumn day – and one I fully intended to make use of.

At a secluded picnic table, I pulled out my notebook and began her story. As I wrote, everything began flowing. The first half was markedly dark and doubtful. The second half became bright and hopeful. That is Matumaini. She is hope and power.

Suddenly, I found the Egyptian-inspired art I’d designed didn’t fit (for that I found another purpose). I had a vision of Tchaikovsky’s “Dance of the Sugar Plum Fairy” meets Hyacinth Hippo from Disney’s Fantasia – and the final version of Matumaini was born.

And now, without any further delay, I proudly present: 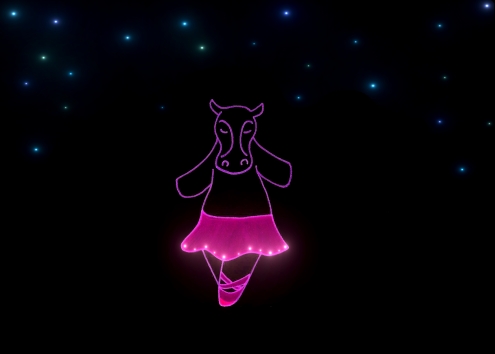 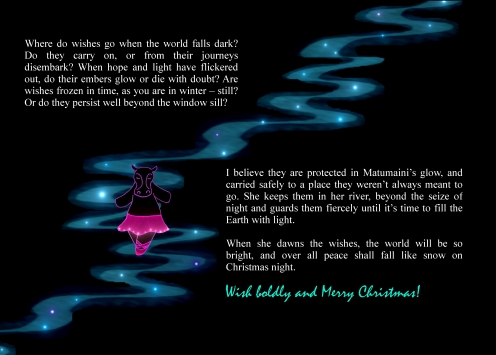