I’ve been BUSY creating new [visual] art throughout February (instead of writing, which was the goal!).

You’ve probably seen most of the recent works, which include: Gerry’s Flamingo, Dancer, Lion, Flamboyance, and my surprise 17-piece collection titled Visions of Meditation – but there’s more!

Today I’m unveiling 8 new pieces – in just this one post! As usual, I’ve added small descriptive paragraphs to tell you where I was coming from when I created the piece.

First I begin with Supernova.

Recently I was at a screening for Particle Fever, a documentary about physicists and what could be their greatest discovery – or failure.  The film piqued my interest in the subject (though, I would likely be out of my element in a physics course?) and made me wonder a few things about space and the laws of nature.  Following the screening and discussion, I spoke with an astrophysicist and asked, “What happens on the other side of a black hole?” (there’s more to it, but that was the take away).  I was curious, does life regenerate? Do particles survive? Does the evolutionary process take over and begin anew? He said, “That is the question isn’t it?”  Still is, yes.

Then, earlier today, I was beginning to color an imaginary bird and thought, “What would a supernova look like from this bird’s point of view?” This is what I came up with: 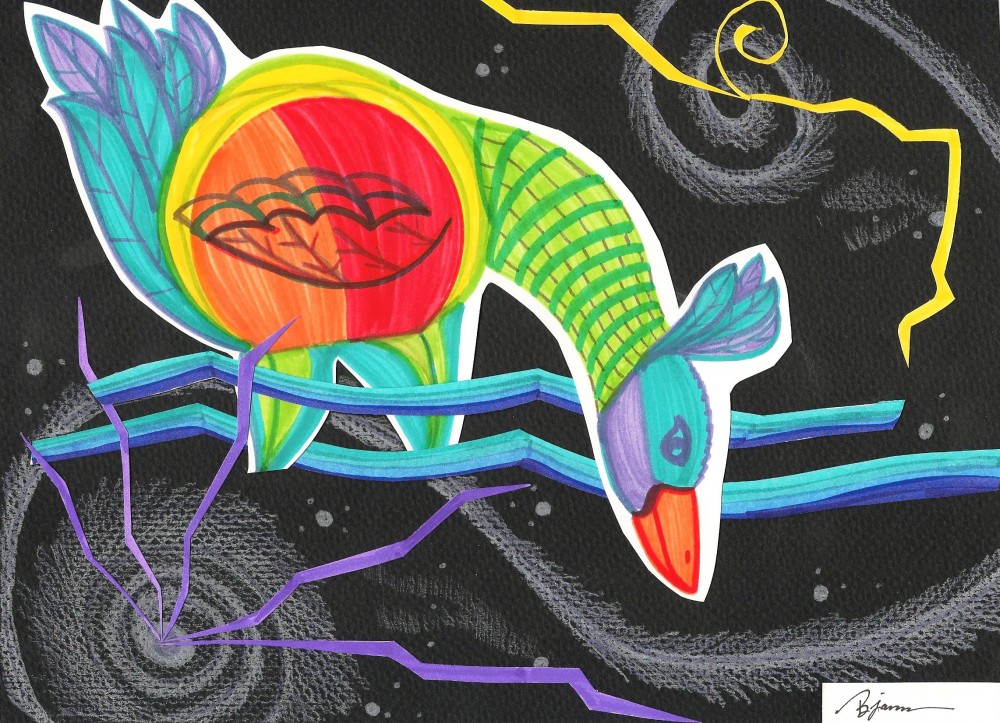 The next two pieces are directly linked.  On a small (probably quarter sheet of cardstock) I drew an eye.  I thought, why not play around with gender rules a little bit.  So I created a very ambiguous piece titled Shadow.  Featuring only half a face with femininity implied, I leave you to decide the subject’s gender.

Inspired by Shadow, I decided to craft a fuller picture using my newly broken H&M scarf hanger as a guide.  I used the hanger to create hair lines before adding a face and filling in the necessary parts with color.  Then I wondered, what if I borrowed the makeup concept from Lady GaGa’s Applause? That was it, I had created Mother Monster – but like Shadow, I still wanted to maintain gender ambiguity (you’ll notice the prominent, masculinized chin) and pay homage to Lady GaGa.  Is this a drag queen or literally an aged Mother Monster?  Again, that’s for you to decide:

Late last week I was sitting here trying to begin writing (I need to buckle down!) and I started doodling.  My doodle began to grow and what I ended up with was a small piece titled Interconnected.  Many of you know that I have a deep-rooted love for elephants (we’ll call it an inherent thing).  Without elephants entire environments could collapse.  This piece symbolically represents the necessity of elephants in their ecosystem.

On the topic of elephants – my friend Kacie must have some sort of ESP because a few days after creating Interconnected, she texted to say she was giving a presentation (titled Ivory Elephants) regarding wildlife crime, particularly the ivory trade. She asked me if I would create some elephant art for her to use during her presentation – so I did, giving her Ivory Elephants and Red Ivory.

Now, it’s time to shift gears just a tad.  About a week and a half ago I began a piece for my “Faceless Man” Series titled Skater Boy.  The piece is designed to be patterend and homoerotic – using the colors of spring and summer (does it feel a little Jamaican to you? That’s ok. Me too).  I’m always interested in using the idea of a 3D figure and flattening it to suit my need as a 2D artist (generally). I’m also not concerned with proportions when it comes to drawing human forms – I design and present what I feel looks right for the image I’m creating – being anatomically correct sometimes takes away from that “wonder.” So here he is:

…and now we’ve come to the final piece for this post.  The 18th addition to my “Visions of Meditation” Series: